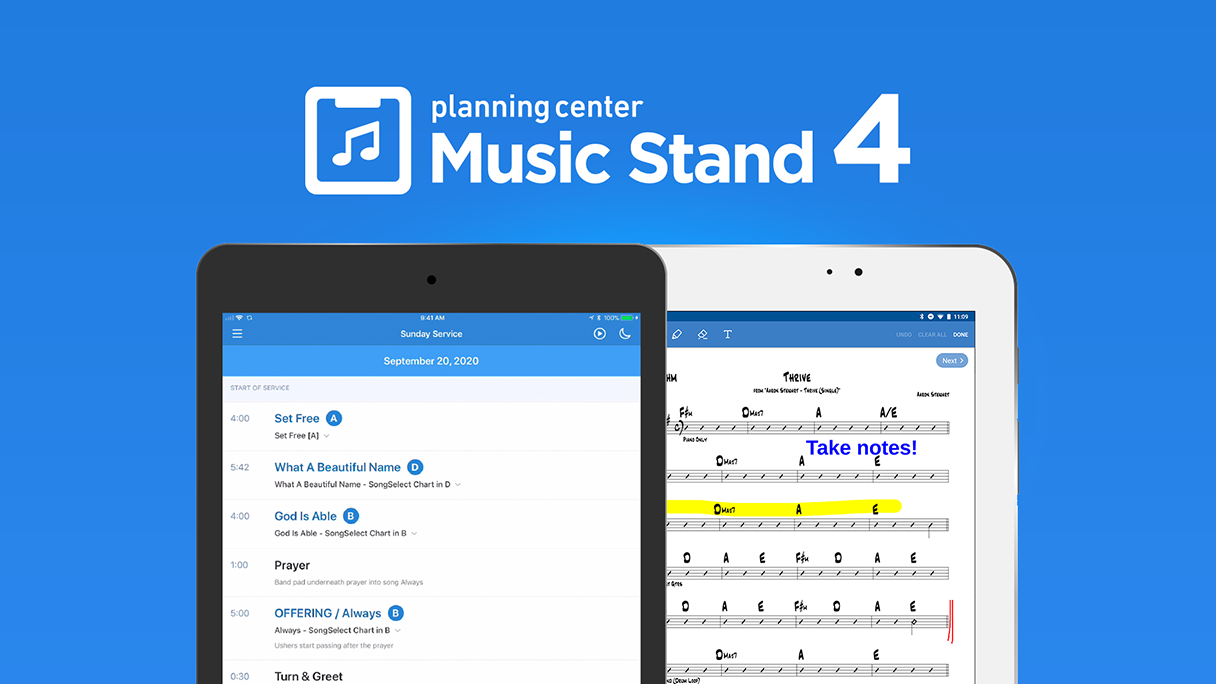 Planning Center Music Stand was one of the first digital music reading apps. It was released in 2010 shortly after the original iPad was released. Over the years we not only added support for iPhone and Android devices, but we gave it lots of minor updates, and 3 major ones. Music Stand 4 is a huge update for Android and iOS with quite a few big new features, and lots of smaller improvements that make rehearsing and playing your music better than ever.

One of the biggest feature requests we’ve ever received was to make zooming easier. Wish granted! Now you can zoom instantly by pinching; no need to enter "zoom mode" anymore! Plus, your zoom settings will save for each user, so everyone can zoom to their heart’s content without affecting everyone else. 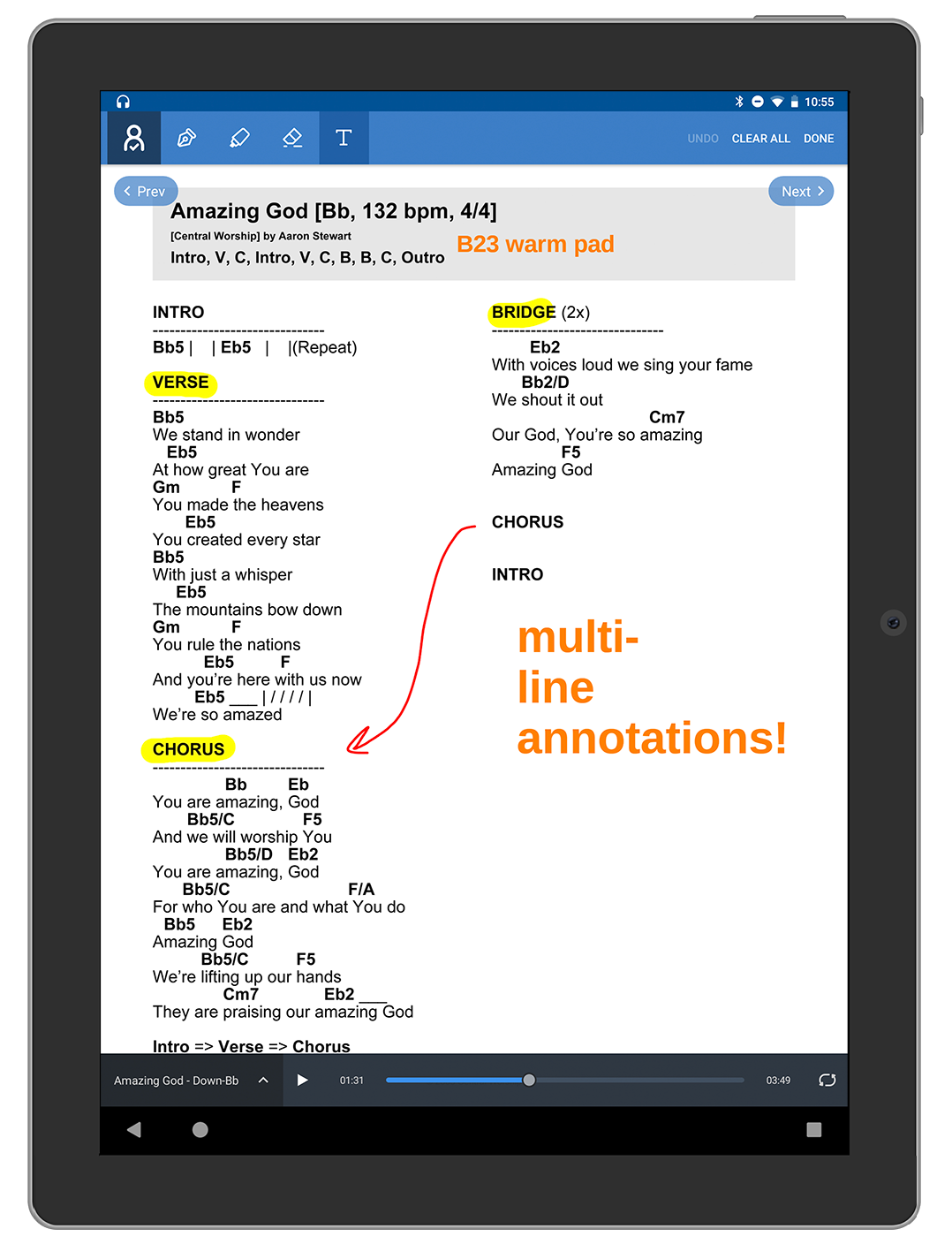 Music Stand 4 puts a huge emphasis on improving annotations. Probably my favorite new feature is the ability to import annotations from other keys, files, or users. A lot of my personal annotations are about the structure of the song, like what I should play for each section, or maybe what keyboard patch I’m going to use. Until now, each time we did a song in a new key, I’d have to start my notes over from scratch. With version 4, I can import my notes I’ve taken on other keys, or even notes created by someone else. Then I can merge the imported notes with my existing notes, or just replace them.

A close second among my favorite new features is multi-line text annotations. When you’re adding some text and want to add a new line, just hit the enter key and type away. Because each line is still part of one text annotation it can be dragged around as one object.

Annotations received a couple other upgrades, too. There are now buttons to change pages while you are annotating so you can take notes on multiple pages much more quickly. We’ve also changed how annotations are stored in our database, making them smoother and more accurate with better support for Apple pencil on iOS.

The media player used to open in the top toolbar, replacing any other toolbar you were using. Now it opens in its own bottom toolbar, allowing other toolbars to remain open. This means you can start the media player, enter annotation mode, and then take notes as you listen, pausing, or scrubbing backwards or forwards with both toolbars open simultaneously.

But the updates don’t stop there! The entire Media Player has been updated with all the changes we added to the Media Player in the full Services app last year. Most notably, it includes the ability to skip songs in your playlist and know which songs you want to skip no matter which app you are using. The iOS version now joins Android with the ability to listen to the entire playlist from the Order of Service view, too.

You’ve always been able to swipe, tap on the page edges, or use a foot pedal to turn pages horizontally. There was even an option to turn two pages in landscape view. Well, we’ve added two new vertical scrolling options to the settings screen to allow scrolling your music up and down. Choose Vertical Full Page to scroll from bottom to top by one page at a time, or Vertical Half Page to see the bottom of page 1 and the top of page 2 simultaneously.

To round out the changes, we’re using most of the sidebar navigation from the Services app, which means My Schedule now shows plans across all your linked accounts. In the Order of Service, longer item details are now completely visible by default, rather than just the first line. And finally, along with lots of smaller design updates, we’ve made dark mode the new default.

With Music Stand version 4, we focused on adding features that allow you to work much more efficiently. Zooming happens instantly. Importing notes, multi-line text, and changing pages or controlling audio while annotating all help you mark up your music much faster than ever. And the faster it can be done, the more likely it is to be done at all. We hope this update makes you and your teams more unified than ever, ready to lead your church in musical worship with increasing excellence.

We consolidated pages and updated and added new features to create the new Team Pages for a more streamlined way to manage your teams in Services.

We updated the Workflows feature in People to allow you to make changes to multiple cards in the same workflow all at once.