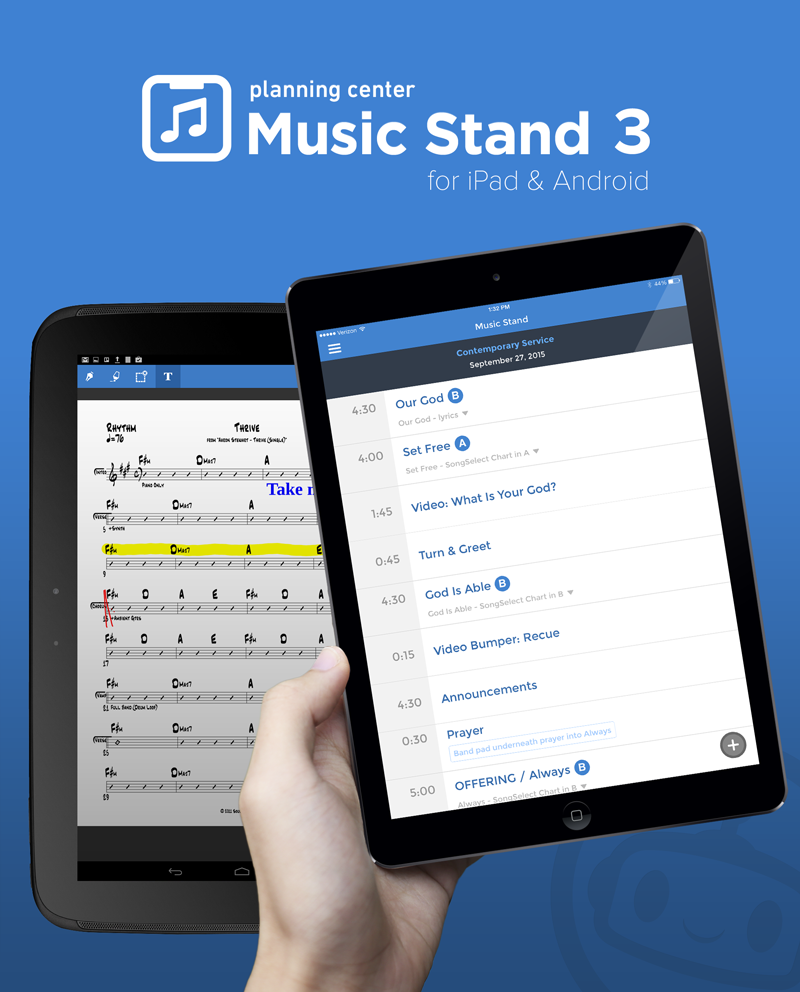 Planning Center Music Stand is an add-on to PCO Services that connects to your account, downloads your music onto your tablet, and makes it easy to plan, practice or perform. Turn pages with a wireless foot pedal, take notes that are saved for the future, and listen to attached audio. Both the iPad and Android versions have been updated to version 3 with a new modern design customized for each operating system. We've also added tons of new features, so we decided to compile the best stuff in one place for your reading enjoyment.

The release of iOS7 provided us with the perfect opportunity to take Music Stand to the next level in terms of design, organization, speed, and functionality. We took advantage of the redesign process to rethink how the entire app was organized to make it much more intuitive and efficient. Things that used to take 7 taps now take only 3. Music Stand 3 for iPad does require iOS7, but as a result we were able to make the app much faster for everyone, and even more so for users with 64-bit devices. 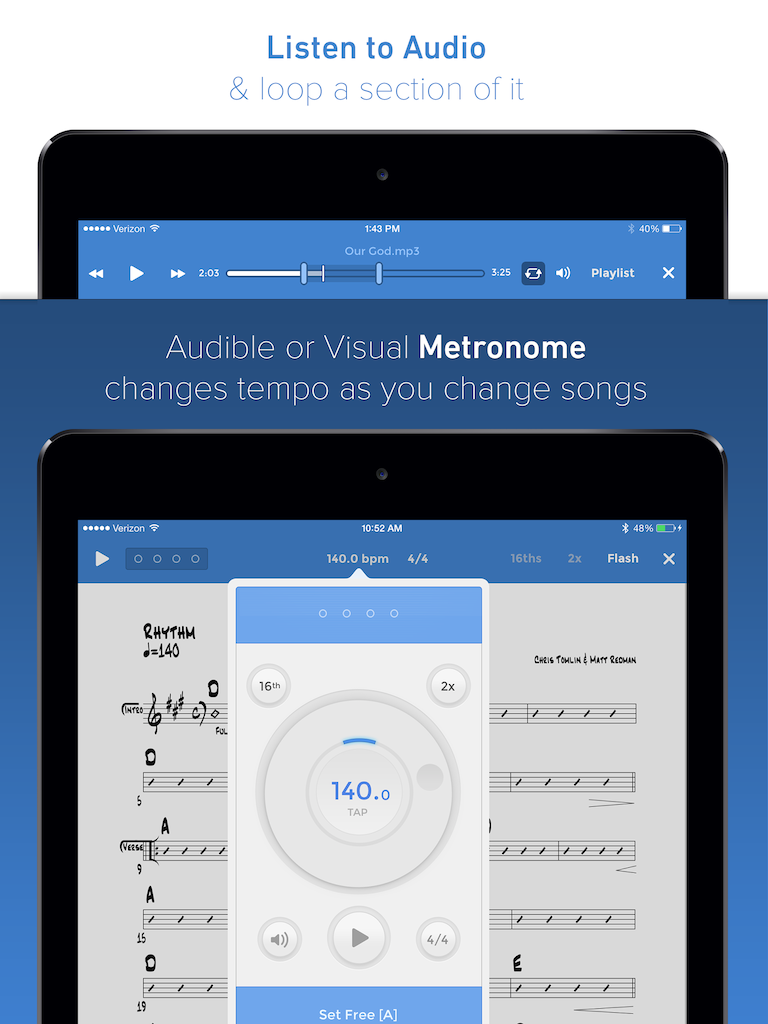 The new audio toolbar contains all the controls that used to be in a popup, so you can view it at all times without covering up your music. Turn on looping in the audio toolbar and drag the new loop handles to set the start and end of your loop so you can practice that tricky chorus until you get it just right!

The metronome controls have also been moved into a toolbar so you can see the beat while flipping pages. To make that beat even more visible, we added a button to "Flash" the entire toolbar in sync with beat. It's noticeable enough to let you see the tempo peripherally even when you're not looking right at the music. 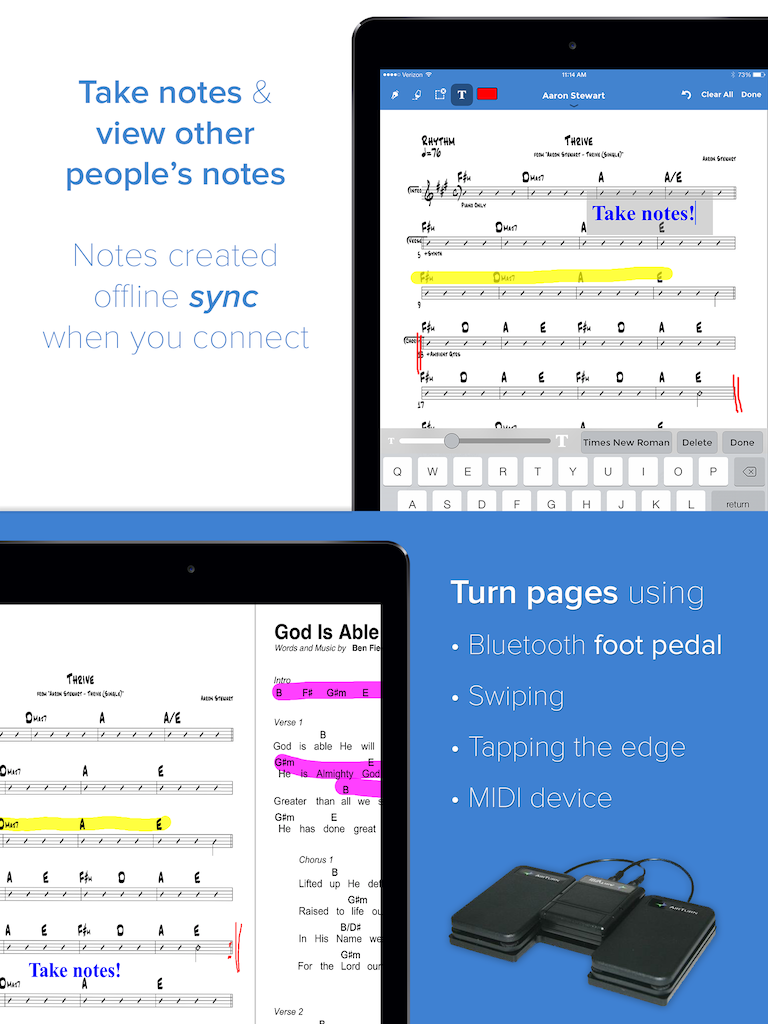 You still have to have an internet connection to initially load your plans and PDFs, but if you go offline later and take notes, not only are they saved reliably, they'll even sync back to the web when you reconnect. Plus when you're online, you can view other user's annotations by switching to them right from the annotation toolbar.

A new dark theme option is perfect when you don't want too much light coming from your iPad. In addition to swiping or using a foot pedal, you can now also change pages by tapping the edge of the page or by using a connected MIDI device. Plus using Sessions will allow you to connect unlimited WiFi devices, whether they be iPads or Android tablets, to control their page turns!

Break Me Off a Piece

We took advantage of the new design to update some of the interface to be more inline with Android standards. We also optimized how PDFs are displayed and made improvements behind the scenes with Android 4.4 KitKat specifically in mind. 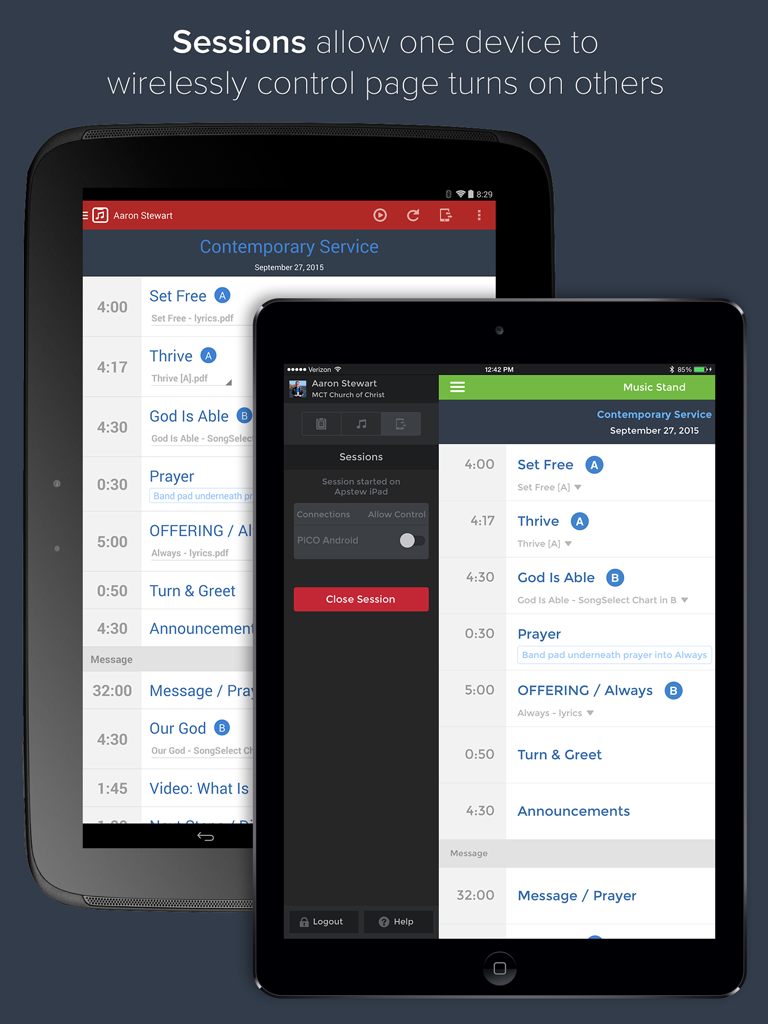 Sessions allow one device to control page turns on other devices. This has been available in the iPad version for a while, and it's finally arrived on Android! We really wanted to get this to you as quickly as possible, so this first version is just the first step. For now, Android devices can't create Sessions, but they can join Sessions started on iPads. Don't worry though, we're already at work allowing full Session control from Android devices and it should be available soon!

Turning your device to landscape orientation now shows you two pages side-by-side, which is great to see more of your music, especially on 10-inch tablets.

So this isn't technically a feature of Music Stand 3, but it definitely is exciting news for Android users. It costs a great amount of time and money to develop every app we make, and we're careful to ensure we have enough users to justify it. Until now, we've had one excellent developer working on both of our Android apps, but as talented as he is, it's hard to move things as quickly as iOS with half the manpower. Even though the total amount of Planning Center Android usage is still only half of iOS, we've decided it's time for another Android Developer, so we've hired Kin Fong who is joining our team as soon as he can move here from Chicago!

Updates on the Way

We've already got some minor updates for each Music Stand app that we'll be releasing in the next week or two, so if you do notice anything we might have missed, please let us know! To stay up on all the latest Planning Center news, follow PlanningCenter on Facebook or Twitter.

Services can now help you track individual file licenses and email you when you've exceeded them.

Households are here! You can now group your family together in PCO Services so that you can be scheduled simultaneously or independently of each other.